It was the beginning of November and it was hot, very hot. As we crossed the border from Malawi to Zambia the weather began to change, and a strong cool breeze began to blow with a faint smell of damp accompanying it. The rainy ‘Green Season’ had begun!

Travelling through the lusciously rough landscape, I was getting ready for my first safari in the unspoilt South Luangwa National Park, Zambia. In the past, I have been very fortunate to go on multiple safaris all over East Africa, however I was informed that Zambia was one of Africa’s great-unsung safari destinations. With wildlife aplenty, stunning scenes across the Zambezi, plus great deals to be had, I was excited to explore.

As we arrived on our first day we had just missed the downpours by a matter of minutes. The air was a lot cooler than the day before, it had dropped from 40c to 20c within a few hours. Wildlife Camp had prepared us with some deliciously warming food ready for our first night drive. As we set off that evening we were introduced to our fantastic guide, Moses, who was both knowledgeable and wonderfully charismatic. I was impressed with how much we saw in these 4 hours. We were fortunate to see almost everything, from big game to beautiful birds just before dusk.

The following morning we woke early for the next drive, and saw the landscape transform from damp and golden, to green and luscious. Within minutes we spotted a family of giraffes, impala and bushbuck feasting on the newly grown vegetation. It felt like that wildlife had suddenly come to life as the harsh heats subsided. It was fantastic to see the animals gorge rather than struggle in hopelessness, a scene all too familiar in the dry season.

The group I was travelling with were keen bird watchers, and were armed and ready with their large camera lenses and binoculars. The wet season, with its dense foliage and thriving insect population, was the perfect time to see the plentiful birdlife Zambia has to offer. I myself have never been an avid bird watcher, so it was interesting to experience a totally different perspective whilst travelling with them. We were not left unsatisfied as we consistently managed to see many interesting birds, from the beautifully striking crowned cranes to the immense fish eagles and vultures. 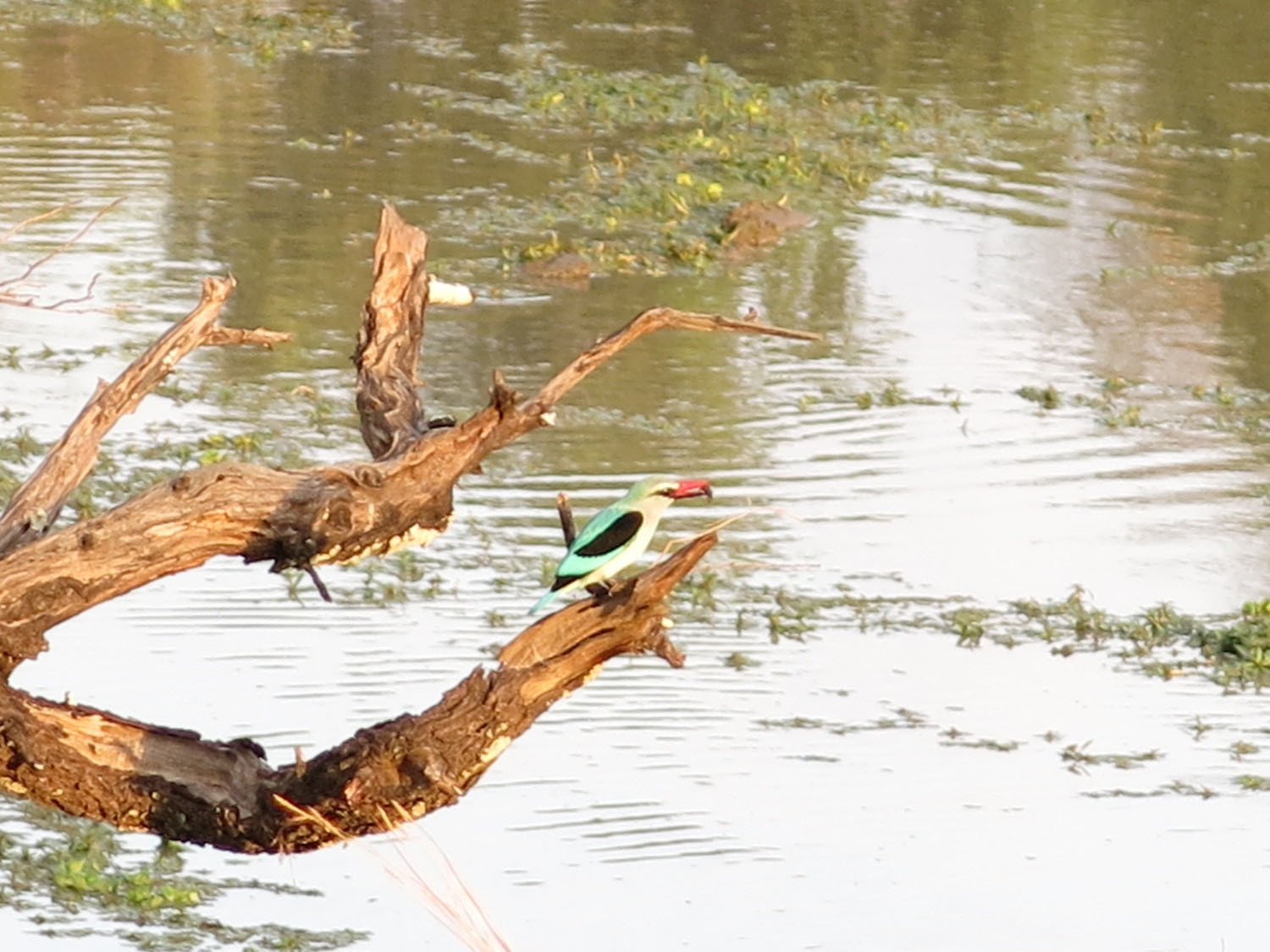 As the river and lakes began to swell, we managed to witness large clusters of Hippopotamuses and crocodiles on the banks. It was overcast and windy, but with short burst of strong sunlight. This was ideal for keen photographers as I felt the light was clearer, with the rain washing away the dust from the air, and the contrasting sunlight breaking through the clouds, giving the landscape a dramatic effect.

We moved lodges after 2 days to the impressive Kafunta River Lodge. By this time it was getting hotter, with consistent sunshine throughout the day. The lodge had a phenomenal view across the Zambezi River, thriving with wildlife as the grass grew. Meandering through the well-maintained tracks, we witnessed many animals with their new offspring – warthog piglets, hyena pups and lion cubs. The notoriously private leopard was remarkably un-shy as we saw one almost every day, relaxing after feasting on a new kill, unable to muster the strength to drag the carcass up the tree, out of sight.

All in all, I thought the safari in South Luangwa during the green season was exceptional. After so many months without rain I saw the landscape and its inhabitants come to life, experiencing something totally different to my last safaris. What I thought was so incredible, and unique to Zambia, was how comfortable the animals were with humans, as we approached many literally within metres. The unbeatable birdlife was colourful, lively and majestic, and I would highly recommend anyone to visit South Luangwa during the green season for this alone. A truly magnificent experience!

So in summary, here is a breakdown of the pros and cons when travelling in the Green Season: