Whether your idea of the perfect safari is a rustic self-drive adventure camping under the stars, a wild ride on horseback, or a luxurious lodge stay complete with a hot tub; we all commonly understand the experience as a wonderful encounter with nature at its best. It’s about being side by side with some of the world’s greatest wildlife, from the boldest of beasts to the most delicate of birds.

Let’s rewind 200 years back to the 1800’s in time when we didn’t have Internet, computers, or air travel. At this time, ‘safari’ didn’t refer to a holiday adventure experience, but rather a long distance journey with large numbers of staff, supplies, trade goods and weapons. The world of trade was in full swing and the route linking the Middle East and Africa was central to the world of business. This was the era of slavery and where we can find the roots of the safari concept.

This article looks at how we have seen the reinvention of the Safari over the last 200 years, moving on through the slave era, towards curious exploration, to trophy hunting glory, to when we see the swapping of guns to lenses and finally the emergence of the luxury eco-tourism safari we see today.

The origination of the word ‘Safari’ most likely came from the Arabic verb ‘Safar’ translating as ‘to make a journey’. The noun, ‘Safariya’ (meaning journey) directly links to the Swahili word ‘Safari’ which we recognize today and entered the English language in the late 1850’s thanks to Richard Francis Burton who undertook a variety of expeditions into Central and East Africa at this time.

As the world learned about the trading routes, curiosity grew and we saw the emergence of the first ‘white hunters’. 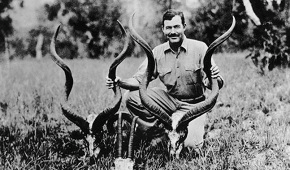 Notably William Conwallis Harris (1836), Charles Baldwin (1850’s) and Frank Seleous (1870’s and 80’s) – adventurers of society who had a thirst for exploration in Sub –Saharan Africa and a strong desire to make new discoveries. Accounts of their wild travels and ‘trophy kills’ further fuelled what many call the golden age of big game hunting. Somewhat ironically (and great for us!) these men’s hunting explorations were also seen to kick-start the initial conservation movement as people recognized the importance of maintaining such species for future generations.

Alongside this there was also a collection of naturists, scientists and botanists who were primarily interested in unearthing new species and reinforced the idea of African Wildlife Conservation. Notably William John Burchell, Thomas Ayres and Gustav Adolf Fischer are all remembered for some of the fantastic scientific research work they did in this field and their legacy remains with us today with a selection of animals that were named after them;

Perhaps one of the unsung heroes of safari history was a young German named C.G. Schillings who, in 1903 led the first ‘photo-safari’. Instead of high-powered rifles, Schilling’s porters lugged enormous crates full of camera equipment. This low-tech photo shoot was however not so successful. Kilos of magnesium powder were needed for the flashes that would illuminate each photo, even during the daylight hours. Schillings’ camera lenses were not like the large telescope lenses of today; they were so short that he had to use live cows as bait, to attract lions within shooting range. Success or no success, it was enough to start the idea of the photography safari. Technology has progressed in the last 100 years – now even the most amateur enthusiasts can capture better photos than poor Herr Schillings – although perhaps with less of a story to tell.

As the craze of the hunting safari spread, wealthy aristocrats and leaders also wanted to have their own adventures, but they weren’t ready to compromise their expectations of comfort and glamour.

In 1892 Lord Randolph Churchill (father of Winston Churchill) set off with 20 tons of baggage including a dozen crates of Bollinger champagne, a team of servants, formal meals plans, special dinner outfits, oh and a piano of course!

A few years later ex-US President Teddy Roosevelt followed with his extravagant caravan of 500 African porters. 500 animals were killed, including 17 lions, 11 elephants and 20 rhinos – the luxury-hunting safari was born.

Roosevelt with an elephant kill

The onset of the Second World War brought an abrupt end to the extravagance of the champagne safari. In a memorable post-war speech, the British Prime Minister, Harold MacMillan, spoke of the ‘winds of change blowing through Africa.’ African countries gained independence from their colonial administrators and as new independent nations; many pledged to introduce and continue the preservation of wildlife.

The taste for the safari was still very much present and the release of the film”Out of Africa” (1985) reminded people of the magic of the African experience. With new flights scheduled to Nairobi, many middle class travellers headed out on mini-bus photography tours that were far simpler than what had been experienced in the glitz of the pre 1920s era.

Rise of eco-tourism and the Safari’s of today

People soon recognized that there was money to be made by offering safari experiences as a holiday. From the 1970’s the luxury safari re-emerged (without the piano and not quite so much baggage!).

Now with worldly air travel and the rise of the tourism industry, the Safari is a lot more accessible. Thousands of us flock to the national parks of Africa each year to appreciate nature through a lens, all too aware of the importance of animal conservation. While there are still controversies about illegal hunting and trading, the Safari that the world has come to know is on the whole, a lot kinder and less barbaric but still maintains some historic links to the colonial traditions… like a good cup of tea, a piece of cake and a sundowner!